One last post, then I'm getting outta here, because I obviously don't have the time or energy to keep up with a blog...
We've launched a Kickstarter campaign to fund our next movie THE GALACTIC JUNGLE-- we're trying to raise 3 grand for props, motivational drugs, etc. As you may or may not know, IT STARTS WITH MURDER! was shot for much, much less (500 bucks, to be exact!), so our production values have literally SKYROCKETED! We need all the help we can get!
Every little bit counts-- we've only got 90 days to reach our goal. If we don't reach it by May 22nd, we get NOTHING. Want a chance to live in infamy? Spread this link around to any sleazemongers you know with deep pockets-- or just throw a buck or two our way. It all adds up!
Follow the link for more details. SLEAZY REWARDS lurk within...
Posted by Scary Manilow at 11:49 AM No comments:

Blogger Vacation™ continues until I finish this goddamn screenplay.

BUT BUT BUT, as this also functions as the official band blog, I have to break in from time to time to give updates... This is one such time.

Item the FIRST! Our most recent pairing with Kid Congo and the Pink Monkey Birds was a rip-roaring success. We couldn't ask for a more lovable group of degenerate rock stars to pay visit to our humble midwestern burgh.

KCC was even nice enough to snatch a photo with Curvacia and myself on the Jackpot patio-- like so: 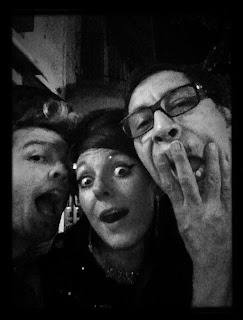 Item the SECOND! Allison at WILL YOU BE MY +1? was kind enough to send some love our way-- via a naughty-but-nice dissertation on our ode to 60's stripping housewives, NUDIE WATUSI. Her thoughts?

"Diving into the first verse is like a bite of a sundae after not having one for a while…a spoonful of delicious nostalgia.

“Now everybody knows/ the peppermint twist/ and you can do the alligator/ and it goes like this/ you’ve been mashing those potatoes/ since the day you were born….”

Harkening back to old dance crazes, it’s what you expected, and what you wanted. It’s also all one long pick-up line…that is, if the “nudie watusi” Manilow finally invites us all to do is what I think it is. (I think so.)"

We here at Spook Light Central couldn't agree more, obviously. Thanks for the kind words, Allison!

Item the THIRD! Witness some sonic noiseplay and stellar footwork from our recent gig at the 8th Street Taproom.

Now, some of y'all may have hear about this big Garage Fest that's coming to town next month: 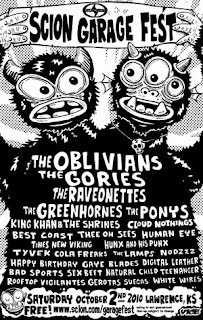 Needless to say, some of us were a bit heartbroken over the lack of local acts on this bill, so we've assembled a few of our best and brightest for a pre-show at the Replay the night before... if anyone out there in bloggerland happens to be in Lawrence that night, stop on in and say "Hello!" We're always happy to make new friends! 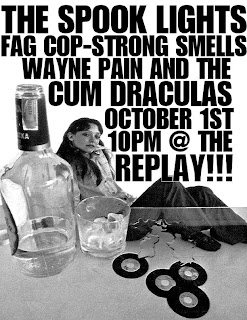 Until next time, I remain...

Posted by Scary Manilow at 8:22 AM No comments:

Howl of the Nightmare!

Still on Blogger Vacation™ for a least another week or two-- trying to wrap up our MUSIC VIDEO, our NEW RECORDING, and get prepped for our second gig with KID CONGO POWERS! All very exciting things, and all things which, combined with the screenplay, are keeping my free time completely OVERBOOKED.
For now, please enjoy this awesome monster we made this summer. My daughter wrote it AND stars in it--I like to think she has a real future as a multi-media personality ahead of her (maybe as a late night horror host?)... Ladies and germs, I'm proud to present HOWL OF THE NIGHTMARE!!!!
Posted by Scary Manilow at 1:53 PM 1 comment: 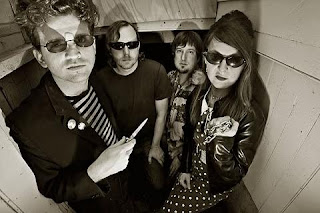 And now, a seasonal, hot-weather update from THE SPOOK LIGHTS!

We're still mid-recording, chipping away at this thing slowly but surely. Despite some unforeseen delays in the creative process, I fully expect that we'll be mixing this thing by the time the leaves turn brown.

Meanwhile: is anyone interested in a copy of our 7-inch? Red vinyl, screenprinted covers, and two great songs for the low-low price of FREE! I've got a handful of them to give away, mostly because I just want to get the songs into circulation, so if you want a copy or know of a good place to send one, drop me a line in the comments and we'll work out the details...

In other news, Curvacia and I got our 4-day passes to this year's GONERFEST, which means our Autumn just got 100% more Memphis-y! It pains me to report that we'll have to bow out of our opening spot with the OHSEES that same week (SADNESS!!!!) -- but it's a small price to pay for seeing the holy trifecta of OBLIVIANS, NEW BOMB TURKS, and motherfucking GUITAR WOLF!

This will be my first experience with them since the death/ reincarnation of Bass Wolf-- but if the new lineup is even HALF as solid as the version I saw ten years back (when they rolled through town with THE CRAMPS, no less!), our money will be more than well spent.

If you haven't seen SORE LOSERS, the movie these clips were taken from yet, do yourself a favor. Director John Michael McCarthy toured this movie and its follow up, SUPERSTARLET AD through Lawrence a decade or so back... The idea of touring an underground movie through rock clubs like a band was a pretty inspirational concept to me at the time. His newest pic, THE CIGARETTE GIRL, looks pretty astounding as well:

PSS: If anyone is interested, here's a bunch of pictures from last year's Memphis trip-- a pilgrimage to see the almighty GORIES in action!-- CLICK HERE and browse away. Hopefully this trip is just as rocking but with less car-hitting-deer action.

Another Deposit in the Swear Jar of Life

"A NOVEL NO PARENT SHOULD MISS!"

Picked this prime slice of summertime sleaze at the local Goodwill the other day. It was a reward to myself for enduring the outermost circle of Thrift Store Hell. Not only did we spend half an hour marooned in the checkout aisle behind a Sweatpant Collector (three carts heaping full), but I was also forced-- FORCED, I say!-- to use less-than-gentlemanly language in front of my daughter. Tragedy! So unnecessary, and yet so unavoidable. Allow me to dish the goods:
I could see her coming from across the store: snorting, spitting, wheezing with rage. Her thinning hairdo-- if you could call it that-- was dyed the same garish color as the letters on her t-shirt (which boasted an endorsement for some sort of evangelical hootenanny), and her false teeth were piss-stained with nicotine. As her shopping cart zigged in a zag-like pattern, I found myself studying her movements, pondering her motivations. What could be making her so angry? She stooped down to collect a pile of stuffed animals and hurled them into a motheaten recliner. How could anyone be so miserable in a place so filled with JOY?
I mean, true, there were masked children running rampant through the aisles, and true, there was nary an employee in sight-- I assume they were sharing reefers over a pile of scavenged treasure in the donation room-- but how was that any different than any other day at Goodwill? The mountains of debris, the absentee approach to customer service-- this is the kind of atmosphere I sign up for when I head down to the local thrift. Am I alone in thinking this is part of the appeal?
I was checking shirt sizes with my daughter in the middle of the store when her cart screeched to a halt behind us.
"Excuse me," she snarled-- not at me, mind you, but at my 8-year-old child. "I'd like to get through."
"Well okay, then!" I dramatically waved my arm to showcase the expanse of aisle beside us. There was more than enough room to go around-- you could have moved a dining set through there without much effort.
"I already done picked up your mess for you!" she barked nonsensically, as if she really believed that we had savaged the entire store. I tried to catch her eye, but her glare was firmly locked on my daughter.
Now, in my head, there exists a litany of erudite responses for just such an event. I've spent hours, even days concocting witty remarks and cataloging them for quick retrieval in the heat of battle. This could have been such a battle. Alas, my tongue is always quicker to the draw.
"Hey lady," I chirped. "GO FUCK YOURSELF."
I won't lie-- it felt pretty good. There was no way to contain my smile. This person, in her many guises-- bible thumper, shitty driver, prohibitionist, values voter-- has been ruining my day for the past few decades. Isn't it time I had the chance to ruin hers?
My daughter was smiling, too, although she obligingly covered her ears in the traditional "bad word" pose. Our opponent lurched away, aghast, sputtering with disbelief. I expecting her to run shrieking to the management, but the confrontation had deflated her. She spent the rest of her time moping around the store, no longer glaring or throwing things, just going about her business with dulled, automatic precision.
Posted by Scary Manilow at 1:14 PM 4 comments: